Last time we looked at configuring an op-amp with negative feedback, but with enough reactive (phase shifting) components to make it unstable. The trouble with the amplifier of choice is that it’s a very low-bandwidth part, intended for use amplifying slow or nearly DC signals. The size of components required to cause instability in this case is impractically large, so we must switch to an amplifier with a much higher bandwidth.

The previous example is a good theoretical illustration of intentionally causing oscillations, but it’s a little impractical to build. Repeating the inductance equation here:

If the feedback resistors are 10KΩ, L turns out to be nearly 16H! A Henry (unit of measure for inductance) is really big; most PCB-mountable inductors are in the micro- or nano-Henries. Even an inductor in the milli-Henries is physically unwieldy.

Reducing the resistors to 1KΩ will bring inductance down to ~1.6H, but that’s still quite large. Increasing the frequency to 10KHz would help a lot, but we’re still looking at ~1.6mH, and the MCP6441 is not made for this; the frequency is already greater than the gain-bandwidth product (9KHz), so it won’t work.

With a higher-bandwidth amplifier, these values become a little more obtainable and can be dropped onto a breadboard for testing. For example, if we move to an LF353, with a GBP of 4MHz, we find first of all that the three manufacturers who make this product either do not include plots, or their plots have peculiar labelling, and in short, look wrong. Here’s how it breaks down: TI has two products, and LF353 and an LF353MX. The data sheet for the vanilla LF353 does not include any plots. The datasheet for the LF353MX on the other hand, does. Here’s ST’s (left) and TI’s (right) view of the gain & phase vs. frequency:

The following is more editorial than should be allowed; sort of a stream-of-consciousness of datasheet interpretation…

Notes (Beware! Datasheets are never free of errata; but then, neither are blogs):

After a little testing, the amplifier’s large signal behaviour looks much more like this: 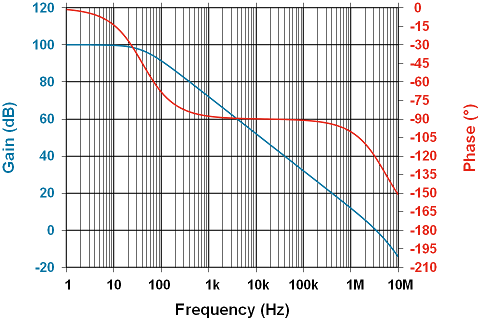 Note the phase bears only a passing resemblance to the data-sheet. Don’t believe it? Try it with a real device: 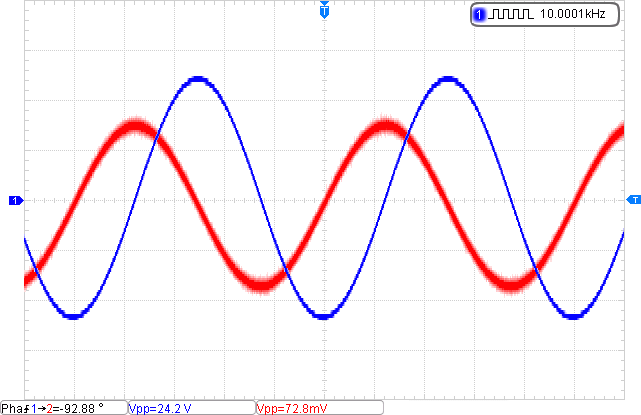 The phase shown on the ST data sheet should be close to 160°, but Vo is clearly lagging by 90°, so the angle would be -90°. Note also the input and output peak-peak voltages. Working this through shows only 50dB of open-loop gain at 10KHz; not quite what the manufacturer says, but interestingly spot-on in TI’s datasheet (Open Loop Frequency Response figure).

Closing the feedback loop with unity gain, we should be able to see the phase error increase as we approach the unity gain bandwidth frequency:

Note the amplitude here is much much lower. Since its configured for unity gain, the input amplitude is actually 7Vpp. More importantly, the phase lag from ΔV to Vo is sitting pretty close to 135° at 5.5MHz input.

That aside, the amplifier was configured as in the last post, but included the test load specified in the manufacturer’s datasheet (2KΩ in parallel with 100pF): 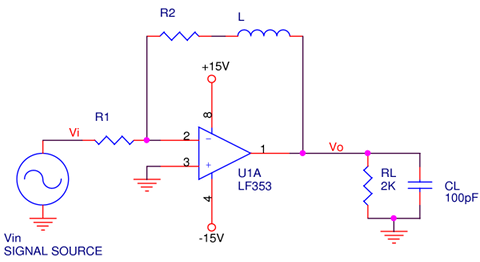 With 10KΩ resistors in positions R1 and R2; the inductor chosen was 1000μH. This did not produce the oscillations expected. It turns out the amplifier is quite able to deal with the inductance in its feedback path. After some careful checking, it turns out a much lower feedback resistance, R2, is needed: 620Ω does nicely. Below is the impedance over frequency, including phase: 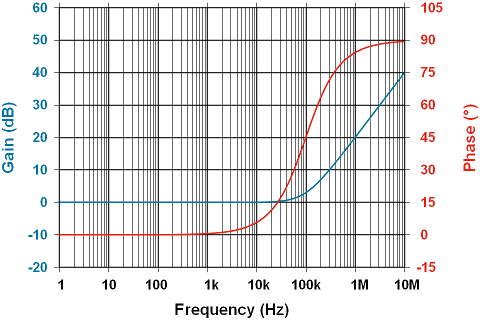 As previously discussed, the positive phase actually pushes the amplifier towards 180°. Here is what the final gain/phase curve looked like: 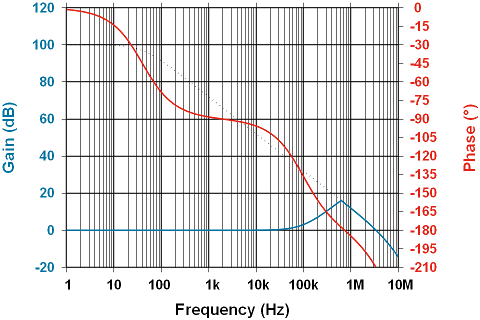 Note the gain is increasing with frequency as we approach the unity gain curve, resulting in a rate of closure of 40dB/decade, which just happens to coincide with the phase reaching -180° where the curves meet. Applying power to this results in some very strange looking waveforms: 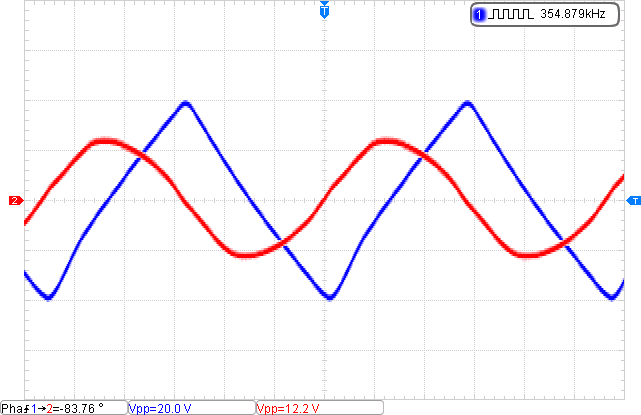 There is no input connected to this, so the amplifier is doing its own thing here. Note that the red trace is what’s on the inverting input; so much for ΔV = 0 at all times! Oscillating at ~355KHz, it’s probably affected by a bit of stray capacitance in the breadboard and the components around it, but those are a little tough to measure accurately. So why does it look like an ugly triangle-wave, and why is the phase angle not 180°?

Previously, in the discussion of decompensated amplifiers, slew rate was touched on: the maximum rate at which the output can change. The LF353’s is between 12 and 16V/µS, meaning that’s how much its output can swing per microsecond. This can be roughly measured from the above scope capture by inverting the oscillation frequency, halving it, and dividing that into the peak-to-peak swing voltage:

It’s nearly exactly where it’s expected to be.

As to phase, the capture shows -83.76°, but this is actually bouncing around quite a bit; it’s unstable! The amplifier is unable to cope with the signal it’s feeding back on itself. Slew rate limiting is actually masking the phase error inside the amplifier, which is very clearly sitting somewhere near 180°. It wouldn’t oscillate otherwise.

Introducing extra phase delay to the feedback path is really the hard way of doing it; it would be much easier to use positive feedback -connecting the output to the non-inverting input- as the 180° phase shift is accomplished without reactive components, though it won’t oscillate without some additional coaxing.

Next time, we get to the basics of filtering.